How Much Damage Can a Leaky Shower Cause? The very nature of showers and bathtubs can create a real risk of leaks and also make them hard to spot until there’s widespread damage. Just how much havoc can a small leak create? Left unchecked, plenty.

Water ruins drywall, warps subfloors, and can even lift tiles. If you’re inspecting a bathroom that doesn’t look or smell quite right, water might be the real culprit.

A common misconception about cementitious materials is that they’re waterproof. But there’s a  big difference between being unharmed by water and blocking it out completely. Portland cement, which is the main component of traditional tile grout and thin-set mortar, doesn’t block water. That’s what the waterproof barrier is for.

In a safe shower or tub installation, there’s a plastic sheeting or tar paper barrier behind the tiles and over the subfloor. It connects to the tub or shower drain, which lets any water that passes through go down the drain instead of soaking in. If the installer didn’t use a waterproof barrier, which is rather common in DIY installations, water might seep through with every shower the family takes.

A Plastic Waterproof Barrier Can Degrade

Plastics last a long time, but they’re not impervious to damage. In extreme conditions, such as a bathroom on an exterior wall without proper insulation, a perfectly fine barrier might fail. It may become brittle, break down, experience cracks and let water through. Older tar paper barriers can crack and fail, as well.

Damage during the installation process can also damage the barrier. If screws have been inserted through the shower wall, such as for mounting a grab bar or a shower curtain rod, the barrier might have holes that allow leaks.

Cracks in a Shower Floor Let Water Seep Through

A tiled shower floor is either installed over a prefabricated shower pan that’s made for tile or it’s built on a concrete shower pan that was fabricated on-site. In either case, the pan can crack if the subfloor isn’t sturdy enough to hold it. If the pan cracks and the water barrier doesn’t hold, water can pour through the floor with every shower.

In an older home, the shower pan probably has a thick, heavy layer of tar paper that was coated with hot tar during installation. A concrete form was built up over that. Those installations are famously durable and could last a lifetime. In a newer home, chances are a plastic barrier was used. 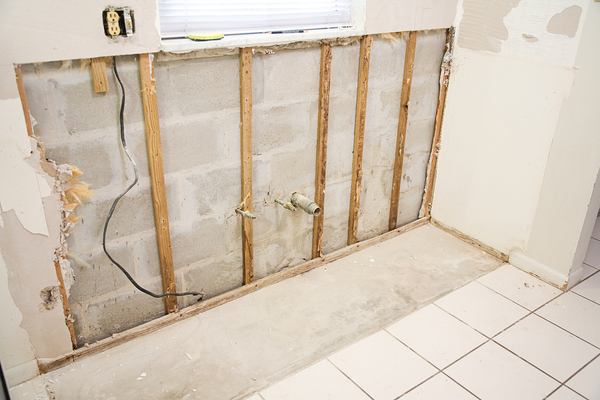 If leaks go unchecked, repairs might spread out to other rooms in the house.

Water Damage Can Affect the Bathroom and Far Beyond

On the surface, a leaky bathroom might look perfectly fine. Maybe there’s a little mold or mildew, which might suggest poor housekeeping habits. But underneath the tile or shower wallboard, leaks have a perfect place to hide and spread.

Water damage from a leaky shower or bath can spread out for years unnoticed. Moisture might softer a ceiling in a room below, degrade drywall on the opposite side of the wall, and, more dangerously, warp and rot the framing members. Where a chronic leak is present, the damage might require major structural and surface repair.

Water gives life but it can also create a lot of damage. A leaky shower could be an expensive repair or replacement job for the home buyer to take on. In minor cases, the owner might need a few replacement tiles or fresh caulk. If the condition is worse, it’s best for the owner to talk with a contractor about the scope of work.

As a certified home inspector, your work gives buyers the information they need to make a smart investment decision. ICA School prepares you for that with standard education modules plus numerous other resources to download and keep. Enroll now and start your education today.