By ICA on September 29, 2017 in Home Inspection Training The structural components of a house are its skeleton. The whole house will suffer if its bones are weak or damaged, but not every house is built the same.

Here’s what sets each of these construction styles apart from the others. Unlike the typical modern stick-built home, a timber frame home begins with large, sometimes enormous, timbers as a skeleton. Many of them are considered historic, but timber framing is still a niche industry. Horizontal beams are supported by upright posts and the joinery is more like fine furniture with dovetails and mortise and tenon. Few or no nails and screws are used in timber framing, but wood dowels are common. Builders are as much craftspeople as they are carpenters.

The timber frame structure is often considered an attractive asset, which homeowners want to display. It’s not uncommon to see a timber frame or post-and-beam home with an abundance of exposed wood both inside and out. But some homeowners choose this style of home only for its strength, not because they want a rustic-looking house. In those cases, much or all of the timber framing might be covered with more modern-looking finishing materials, such as interior drywall.

Because timber framing is quite expensive compared to modern construction, it’s more common to find a modern stick-built house with a few decorative post-and-beam elements than it is to find a timber frame house with all of the costly framing members covered up.

You couldn’t tell a balloon frame home from a modern platform frame by looking except that balloon framing is not common anymore. Most of these homes are considered historic, built in the late 1800s and early 1900s. The most unusual feature of a balloon-frame house is the fabrication of is exterior walls.

This type of construction has framing members or studs that run from the sill plate on top of the foundation up to the roof without any breaks. It’s less expensive than timber framing because it uses less wood and the studs may have spacing as narrow as 12 on center, which means the center of every stud is 12 inches from the center of the one beside it. The structural elements are usually nailed together instead of interlocking with fine joinery work.

The main problem with a balloon-frame house, according to Scott Sidler’s Craftsman Blog, is the risk of fire. Hollows that extend from the foundation to the roof create a sort of chimney effect, which means a fire can spread quickly. Balloon-frame homes built later in the period may have fire breaks added to improve fire safety. These structural elements are horizontal framing members anchored between studs that slow the spread of fire. 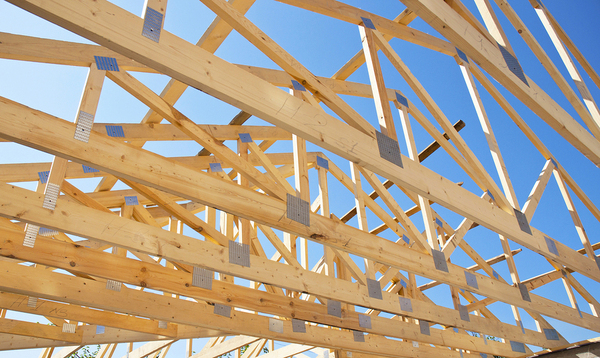 Each Floor of a Platform Frame House Supports the Next

Platform framing is by far the most common modern construction method used in America today. Unlike a balloon frame house with unbroken studs, each floor of a platform framed house is built independently and is designed to support the live and dead load of the floors above it.

Platform framing has vertical and horizontal framing members fastened with screws, nails or both. Stud spacing in a platform frame house is usually 16 on center and fire breaks are built into the structure. The foundation may be a concrete slab or a masonry wall plus a concrete slab, which forms the basement.

One drawback to a platform built house is the number of shorter cuts of lumber. With more joints and more fasteners, a house has many more areas where humidity changes can shrink or swell the wood and more spots where fasteners can fail.

The most common type of construction you’ll find on the job depends partly on where you live. Although platform framing is by far the most common in new construction, older wood framed houses may have balloon or timber/post-and-beam framing.

A certified home inspector knows the differences between wood framing styles and other construction methods, such as concrete block fabrication. At ICA School, you’ll learn everything you need to know to inspect them all. Enroll now and start your journey to a new career today.