Moisture Intrusion in Homes and the Problems it Causes

Moisture damage in a home can be serious.

Water is a home’s mortal enemy. It can destabilize foundations, rot wood and cause potentially lethal mold and mildew to grow. During a home inspection, you want to make sure you identify any sources of moisture and recommend that they be properly addressed.

Water’s most common path of infiltration is through the roof. The roof is a home’s first defense against water, and if it’s weak, it’s the home that will lose the battle.

Most roofs are expected to last about 20 years. A new roof will usually come with a warranty — often 10 years for workmanship and 20 for materials. The materials warranty is void, however, if the workmanship was not done correctly. So the lifespans of some roofs end up being shorter than others, sometimes due to improper installation. You can’t assume that just because a roof was put on a few years ago that it’s in good working order.

Angie’s List notes seven warning signs of a potentially leaky roof, including curling, and buckling or broken shingles. Also look for asphalt shingle granules on the ground near downspouts. When shingles begin shedding lots of granules, they are usually approaching the end of their usefulness.

Water that gets past shingles, tarp and roof decking to enter the attic may drip onto the floorboards (or insulation if there is no floor), or it may run along the underside of the roof toward the eaves, dripping into the walls.

Both situations are insidious because homeowners often don’t know it’s happening. Even if they go up into their attic from time to time, if it is not raining when they’re up there, they may not notice anything untoward.

Mold and mildew could be growing on the underside of the roof, in the insulation and inside the walls. 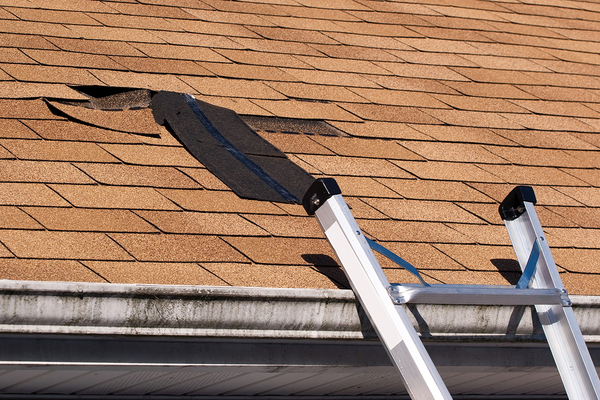 Missing or damaged shingles are the cause of some roof leaks.

The Dangers of Mold and Mildew

Although mold and mildew are unattractive, they have been around for thousands of years and are fairly easily cleaned up with bleach — either chlorine or oxygenated, depending on an occupant’s sensitivity toward the former.

The presence of mold, which can only grow in moist, humid environments, has begun inspiring panic of late. Only a few years ago, the discovery of mold on a wall or the ceiling would have prompted a homeowner to fetch a rag and some bleach, while today it can inspire a fearful call to authorities and an evacuation.

According to the Centers for Disease Control and Prevention, mold exposure can cause cold-like symptoms and upper respiratory distress in some people. For those with asthma, symptoms may be worse, including wheezing and trouble breathing. Further, the CDC said that infants in homes with mold might have an increased risk of developing asthma and asthma-related conditions.

The deaths of actress Brittany Murphy, 32, and her husband, 40 — of pneumonia, six months apart, have been linked to mold in their home, although a subsequent coroner’s report said it was unlikely the cause. Still, the deaths of two people so young of pneumonia in a house with known mold problems struck fear into the hearts of many homeowners.

Thus, mold identification is critical in a home inspection.

Homes are vulnerable to this type of leak only in the winter, but the damage can be serious, extensive, and lasting.

If an attic doesn’t have proper ventilation or insulation, ice dams can form. Without insulation or enough ventilation, warm air from the home leaks into the attic, and then builds up and heats up the underside of the roof. If the roof has snow on it, the snow will begin to melt and slowly slide down toward the gutters. When night falls and the temperatures drop, the snow freezes where it is.

The next day, when the sun and the attic heat up the snow again, it begins to melt but can’t run off the roof into the gutters. It backs up behind the ice dams formed in the eaves and eventually, with nowhere else to go, begins leaking into the home.

A house with long icicles hanging off the edges of the roof is a hallmark of a problematic roof and needs immediate attention. This should always be noted in a home inspection.

Another source of leaks is a home’s pipes. A broken pipe is hard to miss, but a small leak can go unnoticed for a while. A pinhole leak in copper piping, in particular, can do damage for days or weeks before a homeowner may notice softening plaster or a puddle in the basement.

Even then, it might be hard to identify where it’s coming from. One way to learn if any pipes in a house are leaking is to turn off all sources of water — faucets, sprinklers, dishwashers, clothes washers, etc. — and check the meter after 15 minutes to see if it registers any water usage. If it does, there might be a leak.

This type of test will not identify small leaks, however.

Watermarks, flaking, and bubbling on the ceilings below bathrooms are also a sign of leaking. Check out the pipes in the bathtub, sink, and toilet for leaks and note any issues in a home inspection. 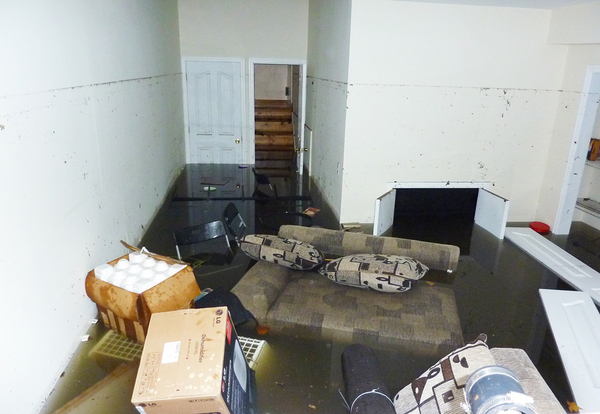 A flooded basement can destroy thousands of dollars’ worth of belongings.

Basements are naturally damp because they are subterranean — there’s no getting around it. Even a basement with no leaks can feel damp and grow mold and mildew. Some basements are worse than others, and these can benefit from a dehumidifier to remove excess moisture from the air.

Other times, basements spring active leaks. These can originate from several sources:

Condensation isn’t technically a leak, but it can do almost as much damage. If bathrooms have inadequate ventilation — or no ventilation at all — the condensation can cause mold, mildew, and rot.

Bathrooms are frequently bathed in humidity. If there is no mechanism for removing it, it builds up and streams down the walls in the form of condensation. If the bathroom is tiled, this is helpful since tile won’t rot. But it can still grow mold and mildew. And if the joints aren’t properly sealed with grout and/or caulking, the moisture could seep behind the tile into the walls or flooring.

Condensation isn’t always limited to the bathroom, either. The irony is the problem is worse in newer homes. This is because they are built so well that they are sometimes practically airtight. This prevents moisture from escaping. The problem is most easily noticed on the insides of windows.

While windows today are made of vinyl, condensation can still seep into wood frames and plaster. In their article “7 Things Your Windows Are Trying to Tell You,” Popular Mechanics advises that condensation damage may be the culprit when windows do not open and close smoothly, due to warping and other problems.

Know How to Spot Moisture During a Home Inspection

The discovery and revelation of any water infiltration into a home is critical to the physical and financial health of its inhabitants. There are so many ways water can enter a house, and depending on the weather on the day you do your home inspection, it may be hard to spot these points of entry.

Always inspect attics and basements carefully for signs of moisture. A moisture meter can alert you to the vaguest presence of moisture, or to spots where moisture has been recently.

For more information about performing home inspections, check out our website today.