Are You Ready for Aerial Photography? It’s Closer Than You Think 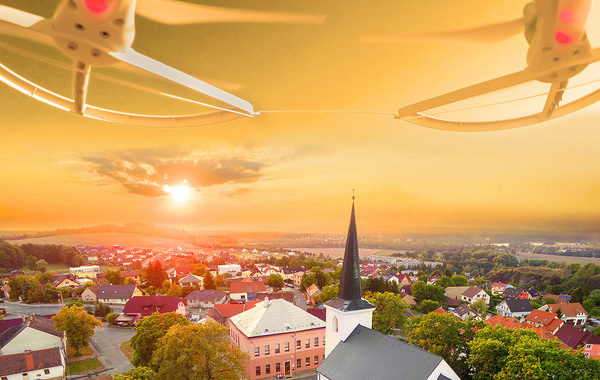 A drone can reach the pinnacle of a steeple, the peak of a gable, and the corners of any flat roof while you stay on the ground.

Unmanned aerial vehicles (UAV) and unmanned aircraft systems (UAS) relate to the same thing: drones. And drones equal easier, perhaps even more thorough roof inspections, especially when you deal with steep-pitched roofs that no one wants to scale.

Drone technology has exploded in recent years. And although there was quite a wait for the FAA to publish official UAS rules, August marks the beginning of legal commercial use. Now you can add another layer of efficiency to your home inspections and customers can get a much closer look at one of the most vital parts of the house.

Although UAV, UAS and drone are often used interchangeably, there’s a difference. Drones and UAVs can be categorized together, and UASs are a bit more. But the “drone” label has become rather generic. That’s a pain point for some UAV enthusiasts because of the negative, weapon-related connotation of the word. For U.S. enthusiasts, though, drone simply means unmanned aerial vehicle or UAV.

UAVs and drones are essentially the same, although UAV Insider says drones “can be differentiated by a level of automation that renders its flight dependent upon pre-programmed behaviors.”

A UAV, they say, needs a pilot on the ground while some drones do not. A UAS, on the other hand, refers to everything relating to a drone or UAV. It’s the aircraft, controller, and the communications system.

Why Drones are Such a Big Deal for Home Inspectors

Roofs might be your least favorite part of a house. They’re usually impossible to access without climbing a ladder and you never know what you’ll find until you reach the top. You can spot missing shingles from the ground. But you can’t find defects such as bad flashing around a chimney or soft spots without getting up-close-and-personal.

That’s what drones let you do without leaving the ground. They allow the inspector to photograph the roof and all of its many features, including valleys and chimneys, from many different angles without risking life and limb.

Unlike walking a roof, drones are capable of giving you a full aerial view of the entire roof system in one shot. They make inspections safer and potentially more comprehensive once you’re comfortable with the technology.

If you wonder just how clear of a picture you can get using a drone, check out this video of a roof inspection.

Downsides to Drones for Roof Inspections

Everything in life has a downside. With drones, one of the biggest is cost. You might pay $400 for a low-end model. Or you might pay thousands. Naturally, the better the drone the easier it will be to operate and the more work flexibility it will have.

There’s also the learning curve. Few in number are the drone pilots who haven’t watched a cherished UAV literally bite the dust, dirt, tree, pavement, swimming pool or another obstacle. It’s a hazard of the job.

Another issue is the lack of hands-on work. For some inspectors, the ability to touch what’s being inspected makes a difference. But with as detailed as UAV photography can be, defects are crystal clear. And you don’t have to risk your neck to locate them.

Drones have a bit of a sketchy reputation because of the use of the word to describe certain military weapons. But drones used by hobbyists and some businesses in the U.S. have nothing to do with the military; they’re very different and much smaller. You don’t have to embrace the word at all. Stick with UAV if you like.

Whatever you call them, the home inspection industry is catching onto drones quickly. And ICA School offers a new course module that trains inspectors to use the technology to its fullest advantage. Are you ready to step into the next big thing for home inspections? Enroll now and learn how it’s done.