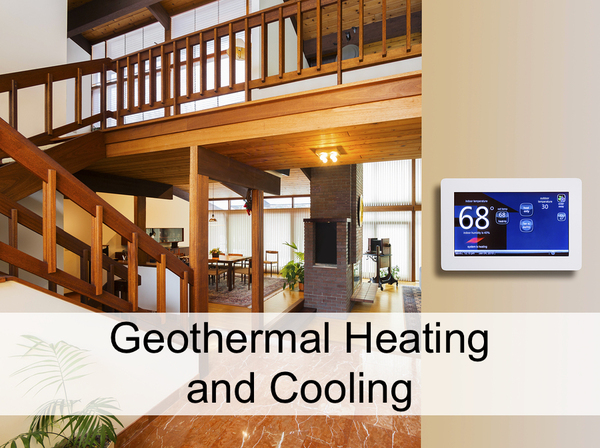 Geothermal systems are powerful enough to heat and cool a large home and still save money and energy.

There’s a reason why geothermal heat pumps are popping up across America. They’re extremely efficient. And there’s also a reason why home inspectors should be a little concerned: The technology is more complicated than a traditional HVAC system.

Although they’re not nearly as widespread as traditional furnaces, heat pumps and air conditioners, geothermal units make a big promise that they’re apparently able to keep: dramatically lower energy consumption and operating costs. And that could mean more systems will move in to replace old ones as they wear out.

If the technology is new to you, here’s how it all works

Some people hear “heat pump” and they’re instantly turned off to the idea. One of the biggest complaints, and it’s a valid one, is the inability to provide adequate heat when the outdoor temperature dips too low. So if a traditional heat pump system won’t work properly for heat in, say, Connecticut in January, why should a geothermal heat pump perform any better?

The difference is the heat source. A traditional system derives its heat from the outdoor air. That’s why it stops producing heat in extreme cold. But a geothermal system derives its heat from deep in the ground or a body of water. Temperatures below the frost level stay fairly constant, around 50 degrees, which makes ground-source geothermal heating a great option for homes in every state. Submerged systems work the same except they derive heat from the body of water.

As for cooling, the system works in reverse. In summer, a geothermal system extracts heat from inside the home and send it back into the ground or the body of water. The basic technology is very much the same as any heat pump.

Watch how a geothermal system works to provide heating and cooling:

What Makes a Geothermal System Tick

Inspecting a geothermal home heating and cooling system might give some home inspectors pause. And in some ways, it should. Part of the technology is unlike anything else around the home. But in other ways, it’s very similar to any other heat pump.

Geothermal systems rely on pipe underground or in a body of water. Horizontal loop systems have coils of pipe between 4 and 6 feet underground. Vertical loop systems also use pipe, but it’s installed vertically and deep into the soil. And with a submerged system, horizontally oriented coils sit below the water’s surface. That’s all probably new to you.

The interior components are probably much more familiar. After all, it really is just a heat pump. If you can run the system through its paces, you can draw similar conclusions about the system as you can any other. Watch out for plumbing leaks, however. Closed loop systems run from the ground back to the house where they connect with the heat pump. And if the system also supplies the home with hot water, you’ll have more plumbing fittings to inspect.

More homeowners are switching to geothermal, but don’t expect a mass exodus from traditional furnaces just yet. The technology is expensive. Most homeowners pay between $10,000 and $30,000 for a new system, says the Family Handyman. And while the Department of Energy says that it pays for itself within 5-10 years, that’s still a major investment. For now, it’s still a bit of a novelty. But as the technology improves and more people catch on, they’ll be part of your usual repertoire.

Home inspecting is an ever evolving industry. That’s why ICA School offers a comprehensive training program and updates it frequently. If you’re ready to make that leap to a new career, enroll now and get started tomorrow.